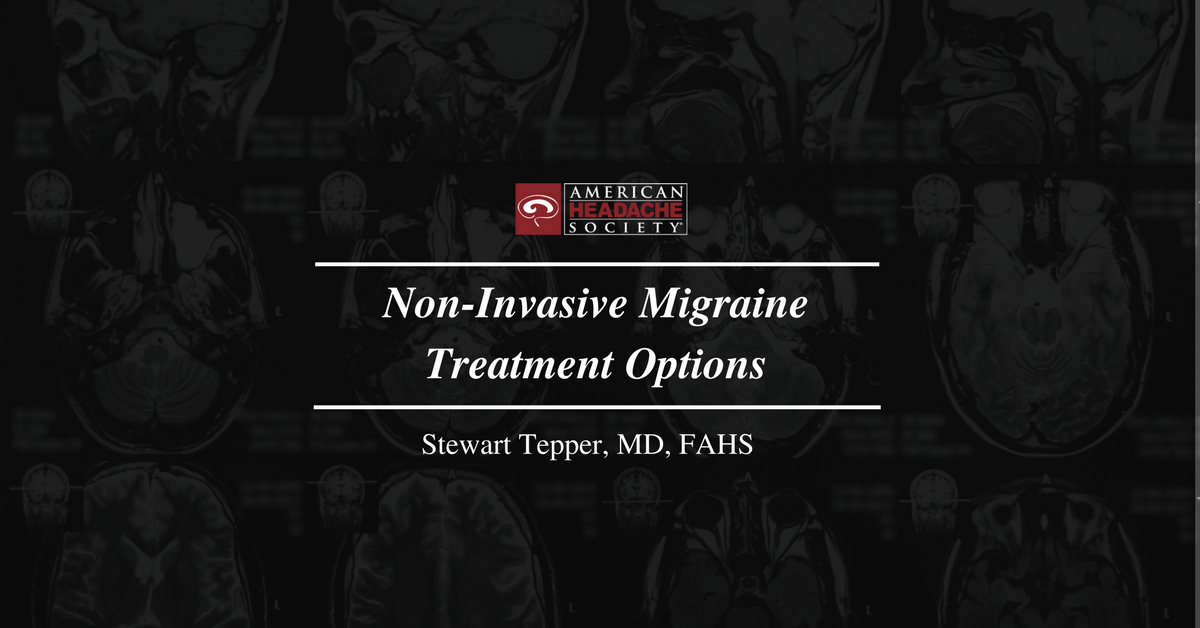 Stewart Tepper, M.D. is a professor of Neurology at the Geisel School of Medicine at Dartmouth, Director of the Dartmouth Headache Center, and a board member at large of the American Headache Society. He spoke with AHS to explain the efficacy of neuromodulation devices, which are FDA approved, and how the technology works.

What are non-invasive neuromodulation devices?

Why would patients use these devices?

If you had a device that could terminate a migraine attack without a drug, why wouldn’t you try that first, if it didn’t have side effects? If you had a device that you could turn on twice a day, or three times a day, and prevent your migraine or cluster headaches without a drug, why wouldn’t you want to do that before you took a daily medication, or before you came in every three months to get Botox? I think many people would much prefer a non-invasive neuromodulation device to a medication or 31 injections every three months.

What are the FDA-approved devices? How do they work?

The first device approved by the FDA is called the Transcutaneous Supraorbital Neurostimulator, but everybody calls it the Cefaly Device. This is now in its second generation. The Cefaly Device comes with electrodes that are purchased separately. They are peeled off and then put on the forehead. The device has a magnet that connects the device to the electrodes. Once the device is on the forehead, it’s programmed to stimulate the supraorbital nerves and transmit a signal that goes into the brain. The patient wears this for 20 minutes. If they do this every day over three months, gradually the number of migraine attacks goes down.

The second device approved by the FDA is the Single Pulse Transcranial Magnetic Stimulator. It stimulates using a magnet rather than an electrical stimulation. It’s ready to go—you put it on the back of your head, press a button, and the magnet is discharged. You don’t feel anything. It’s a minimal-risk device.

The third device is called a Non-Invasive Vagus Nerve Stimulator, or NVNS. GammaCore was approved by the FDA for the acute treatment of attacks of episodic cluster headache. The way this device works is through electrodes. The patient applies gel to the neck, then turns the device on and puts it on either side of the neck. It can be programmed to cycle and stimulate for two minutes—two cycles is one treatment. That is what the FDA approved for terminating attacks of episodic cluster headache and migraine.

Are there other devices in the works?

Can you tell us about them?

One is called Nerivio Migra: it’s a remote-controlled, non-painful stimulator. It sticks on the patient’s arm and is turned on through a smartphone app. It stimulates electrically for 25 minutes and has different pulse widths, so it oscillates on the arm. It’s used acutely during the migraine acutely to terminate the attack.

The last of the non-invasive devices that I’d like to talk about is called a Caloric Vestibular Stimulator. It has a computer system and the actual stimulation is delivered via prongs placed in the patient’s ear, like headphones. This device heats and cools the vestibular nerve inside the ear and rides the vestibular nerve into the brain to gradually turn down migraine frequency.

There is also a minimally invasive device that is placed by a plastic or neurosurgeon through the mouth and screwed into the skill above the teeth. When in place, one end sits over an area outside the brain in the skull called the SPG. This is an SPG stimulator. It doesn’t have any wires or batteries; once in place, it’s triggered by a remote control. The patient puts it on the cheek, and it connects, and turns on the stimulator.

And that doesn’t mean that we all won’t be doing it shortly. I’m hoping that’s the way it goes.

Dr. Tepper is a member of the American Headache Society, a professional society for doctors and other health care workers who specialize in studying and treating headache and migraine. The Society’s objectives are to promote the exchange of information and ideas concerning the causes and treatments of headache and related painful disorders, and to share and advance the work of its members. Learn more about the American Headache Society’s work and find out how you can become a member today.