Skip to content
Home / News / Gender Inequality in Headache Medicine: What Not to Say
All
Advocacy in Action
Headache in the News
Media
Society News
Society Spotlight 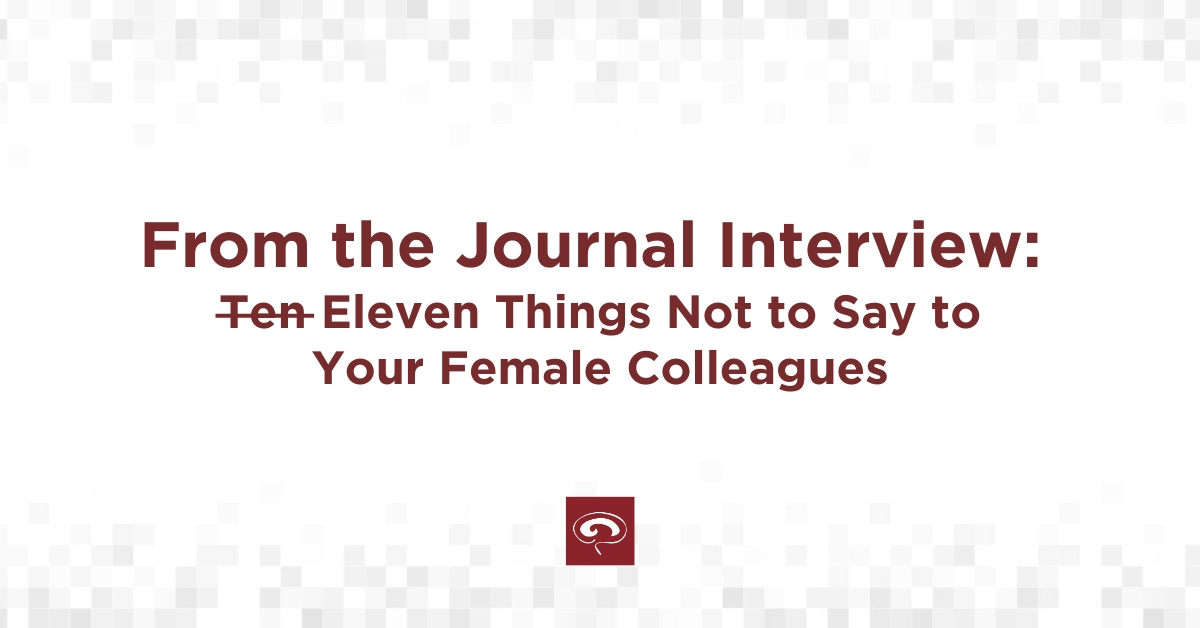 Gender Inequality in Headache Medicine: What Not to Say

Female physicians and healthcare professionals face a number of gender-related obstacles throughout their careers. This is a problem for the field of medicine in general—and neurology and headache medicine are not immune to it.

These are universal experiences for women throughout the healthcare field. So, Clarimar Borrero-Mejias, MD, and colleagues recently published a list of common microaggressions—and how to address them—in the journal Headache®. The list is intended to give male and female professionals an idea of how their words may diminish the contributions of their female colleagues and create gender inequality in headache medicine.

“There is science behind the fact that these microaggressions have an ultimate impact on women as they become professionals,” Dr. Borrero-Mejias says. “We wanted to be candid about this and bring light to these topics.”

The paper published in Headache® is a product of the Migraine Mavens Writing Consortium, a Facebook group founded in 2017. The goal of the group is to provide female headache clinicians with greater support and visibility and help fight gender inequality in headache medicine.

“As you support each other, collaborate, and talk about your professional experiences in the group, you start to see a pattern of experiences with colleagues who make sexist or unnecessary comments,” Dr. Borrero-Mejias says. “These comments can be demeaning to women and the layers of duties we have as women.”

In the spirit of those efforts, Dr. Borrero-Mejias and colleagues assembled the list of Eleven Things Not to Say to Your Female Colleagues. While the entries on the list did not carry the names of the people who personally experienced them, they were not fictionalized in any way.

“We wanted to highlight why these comments or situations are unnecessary and inappropriate but also to discuss the reality of how women in health care face circumstances that are different from men’s,” Dr. Borrero-Mejias says.

Each entry on the list of 11 things has several components. First, a scenario. Then, the list says what not to say—and why you shouldn’t say it. Next, it details what you could say instead of the offending remark in the given situation. The list also provides possible responses that you could use should you find yourself a bystander if the situation arises.

“We wanted to look back on all of the things we had already commented on and decide what should be said in a given situation,” Dr. Borrero-Mejias says. “The goal was to come up with a better way to address the disparities.”

The list was originally intended to contain 10 situations female medical professionals frequently find themselves in. But the authors soon realized that limiting themselves to 10 entries would shortchange the effect they were trying to have.

“From the scenarios provided, we selected 10 that best demonstrated the range of reported experiences or topics,” Dr. Borrero-Mejias says. “But, there were so many people who collaborated on this that we realized there might be more than 10 topics that were worth mentioning. So, we decided to add another.”

Dr. Borrero-Mejias notes that while the list is not all-inclusive, the scenarios published in Headache® appeared to be universal among Migraine Mavens members. She also highlights that the women they spoke with who belong to other marginalized communities face additional inequalities. It’s not just a gender gap, she says, pointing out that race and ethnicity also play a part.

Despite the list’s serious nature, Dr. Borrero-Mejias notes that this is about making progress against gender inequality in headache medicine—not necessarily shaming those who may be guilty of creating some of the list’s scenarios.

“We want to put it in a positive light, and in ways that you can highlight those differences and challenges in more supportive ways,” Dr. Borrero-Mejias says. “We want to talk about what the problems are, highlight the solutions and show that you can overcome those barriers in the professional realm.”

Rebecca Burch, MD, FAHS, one of the paper co-authors, echoes this sentiment. She points out that some of the most common forms of sexism in medicine are small or offhand comments. These remarks are often completely unconscious on the part of the speaker.

“It’s important to recognize that most of us have probably said these things at least once in our lives,” Dr. Burch says. “Women say these things as well as men. The goal of the paper is not to shame anyone. It’s to raise awareness, start a discussion, and suggest alternatives and ways forward.”

Burch says that while these actions and comments appear small, they can add up over time. This can create an environment where women feel “less than.”

“We wanted to highlight these situations so that we can all be more aware of them, recognize them when they happen, and find alternatives,” she notes.

Dr. Borrero-Mejias says she is really happy to know there are other people who share her feelings on gender inequality in headache medicine. She says the issue is catching on in health care as a whole. Other societies and groups beyond the neurology space are addressing the inequalities created by the interactions addressed on the list.

“I think it takes courage and conviction, as a woman, to bring attention to these topics. We are sharing our vulnerabilities.”

For more about the latest studies and papers published in Headache®, visit the AHS News page.