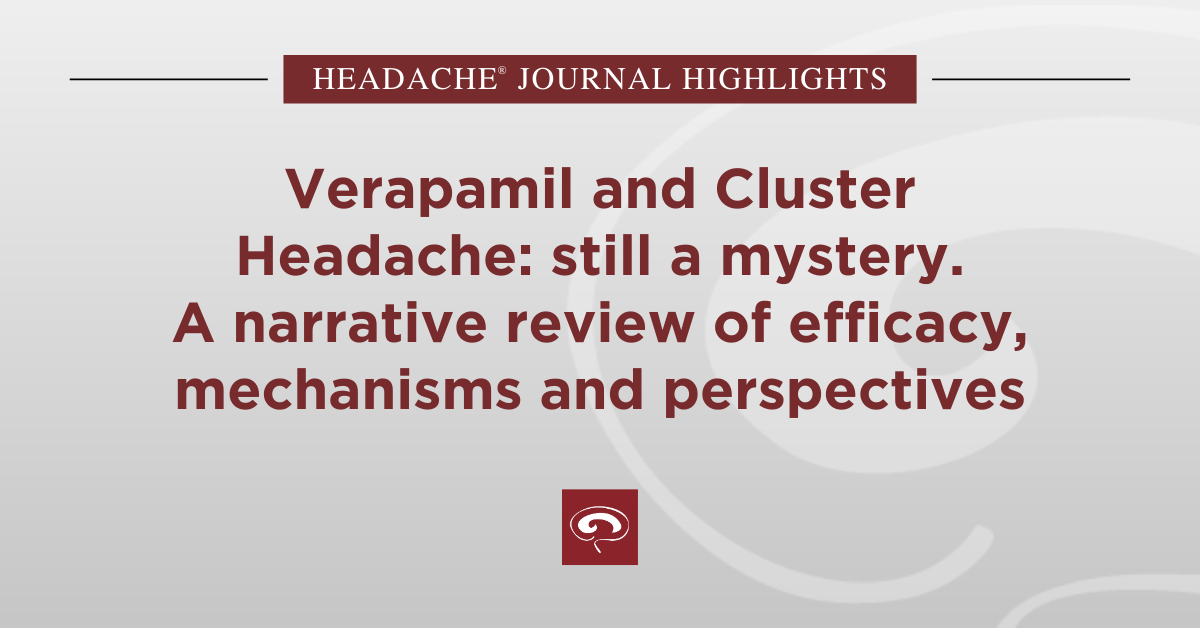 A review published in Headache® indicates that existing research supports the use of verapamil. Dr. Katherine Hamilton weighs in.

Verapamil is the drug of choice for cluster headache prevention for three decades running. Despite this, its mode of action and therapeutic target are still unknown. This lack of understanding was the basis for a recent review published in Headache®, where Rigmor Jensen, MD, of the Danish Headache Center and colleagues evaluated existing literature dealing with the effect of verapamil and other calcium channel blockers in cluster headache treatment and investigated its possible effect mechanisms.

Katherine Hamilton, MD, of the University of Pennsylvania, reviewed this article for the American Headache Society. Dr. Hamilton says verapamil is one of the most commonly used medications for cluster headache. She highlights, however, that there are not a lot of studies dealing with verapamil’s use in this manner. But Dr. Hamilton says much of the research that does exist appears to indicate that it is effective for cluster headache treatment.

“There is definitely evidence to support the use of verapamil in cluster headache prevention,” she says. “There are limitations on the studies that exist, but we have to go on what evidence we have.”

Dr. Jensen and colleagues conducted a Pubmed search of the terms “’Verapamil’[Mesh]” and “’Cluster Headache’[Mesh].” Publications were included if they made a substantial contribution in the areas of efficacy (randomized controlled-trials or open-label studies), safety and/or mechanism of effect.

Half of chronic patients experienced a benefit from verapamil treatment among the reviewed studies. Additionally, episodic patients saw attack burden reduced by one attack per day on average. The open-label studies supported a dose-dependent level of efficacy. Human and animal studies indicated that verapamil may have modulated circadian rhythms, perhaps in central pacemakers, resulting in the observed effect.

Dr. Jensen and colleagues concluded that verapamil appears to be an effective prophylactic drug for cluster headache treatment. The researchers said verapamil is still the drug of choice for cluster headache treatment despite a scarcity of controlled trials. They noted that a chronotherapeutic approach might increase the effect. There needs to be more basic and pharmacokinetic research, however, to fully understand the mechanism behind why this might be.

“Verapamil is still considered quite effective for cluster headache prevention despite the somewhat-limited trial data,” she says. “The mechanism of verapamil and the hypothesized effect on cluster headaches supports this.”

Dr. Hamilton says there is a need for more randomized, controlled trials on the use of verapamil in cluster headache prevention. Specifically, she wants to see verapamil compared to some of the newer treatments such as vagal nerve stimulators. This is because of possible cardiovascular complications associated with verapamil.

“Despite its effectiveness, I think one of the downsides of verapamil is risk for possible side effects,” Dr. Hamilton says. “With some of the newer treatments, that’s not as much of a concern. So, I think that would be an interesting direction to go.”