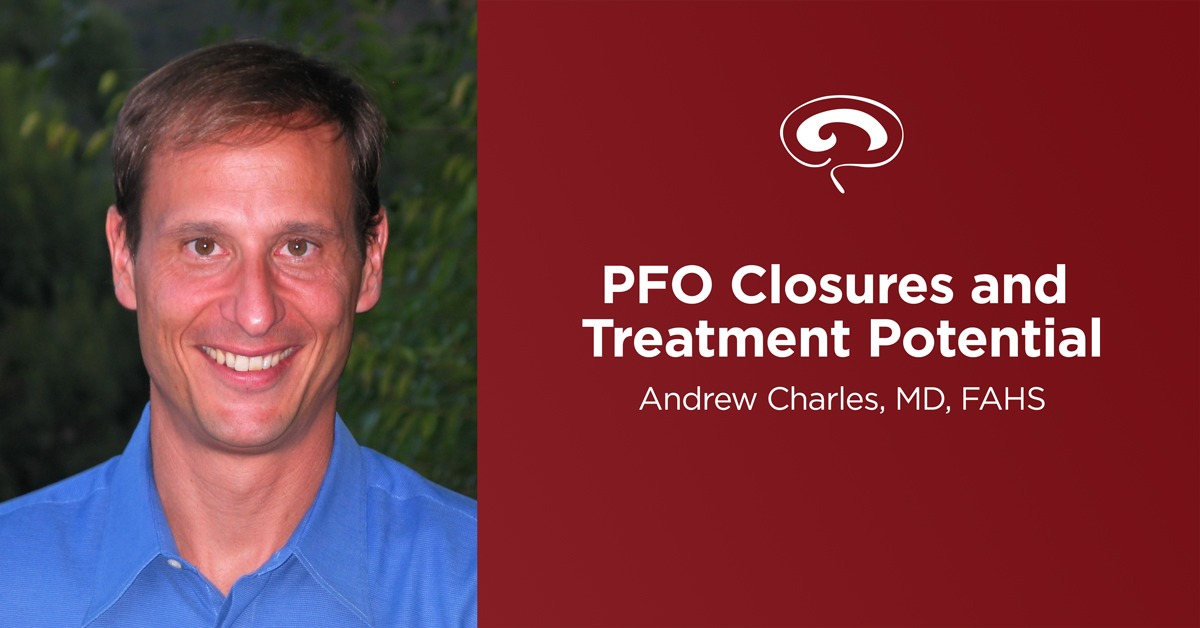 Andrew Charles, MD, FAHS, provides an overview of the current understanding of Patent Foramen Ovale (PFOs) as it relates to patients with migraine and their risk of stroke

A passageway in the heart that connects the right and left atria may be significant for some migraine patients. Patent Foramen Ovale, or PFO, is present in roughly 25% of individuals. In a recent interview, Andrew Charles, MD, Professor of Neurology at the David Geffen School of Medicine at UCLA, the Meyer and Rene Luskin Chair in Migraine and Headache Studies at UCLA and director of UCLA Goldberg Migraine Program shares why the relationship between PFO and migraine may be important.

What is PFO and PFO closure?

How was the association between PFO and migraine discovered?

A relationship between PFO and migraine was first observed in divers. When divers ascend from deep water to the surface too quickly, bubbles can form in the veins. If these bubbles bypass the lungs––for example, through a PFO––and go straight into the arterial circulation, then they can travel to the brain and other organs, which causes decompression sickness.

It was observed anecdotally that when divers with migraine had their PFO surgically closed, they not only had less decompression sickness, but also experienced fewer migraine attacks. Other patients with conditions in which blood can travel directly from the venous circulation to the arterial circulation have also noted that migraine improves if shunts in the circulation are repaired.

Why is PFO closure significant for patients with migraine?

What studies have been conducted to investigate this relationship?

Multiple clinical trials have been conducted to determine if closing a PFO (a procedure that can be done on an outpatient basis by a cardiologist) is helpful for migraine. None of the studies met its primary endpoint, meaning that none showed the PFO closure was significantly effective in reducing migraine in all migraine patients. However, interesting secondary analysis of data from The PREMIUM Trial suggested that patients who had aura with the majority of their migraine attacks did, in fact, respond well to PFO closure. Therefore, based on the evidence that we have to date, we know there is an association between PFO and migraine, but it is important to note that an association does not indicate causation.

What is the next step is for PFO closure?

We are in an interesting situation, where despite the fact that the clinical trials of PFO closure for migraine have been negative, there may be a subgroup of patients for whom PFO closure may be effective. Further studies with carefully selected patients may be warranted. There’s also some compelling information that indicates a relationship between PFO and stroke, and recent studies show that PFO closure in patients who have had a first stroke reduces the risk of a second stroke. We know that there is an increased incidence of stroke in patients with migraine, but we don’t know why.

An interesting possibility is that PFO could be responsible for increased risk of stroke in migraine patients. In patients who have blood clots or air bubbles in their veins, PFO can allow the clots or bubbles to cross over to the arteries and travel directly to the brain.

We just recently published a paper in Stroke that describes a study we conducted with UCLA stroke patients. In collaboration with stroke neurologists and cardiologists at UCLA, we examined stroke patients had UCLA who had no apparent reason for having a stroke; i.e they didn’t have high blood pressure, clots in their vessels, atherosclerosis or other common causes. We found that, of those patients, a striking percentage had PFO. Another striking percentage had migraine. Of these patients with what we call cryptogenic strokes who also had migraine, nearly 80% of them had PFO.

The clinical trials do not give us evidence to support PFO closures in migraine patients, and yet the relationship between PFO, migraine, and stroke remains a fascinating issue. I do not want in any way to advocate that we should be performing PFO closure in most patients with migraine. But I believe that further research is warranted to try to better understand a potential role for PFO in migraine. This improved understanding could open up other possibilities for migraine therapy that we hadn’t previously considered.

Andrew Charles, MD, FAHS, is a member of the American Headache Society, a professional society for doctors and other health care workers who specialize in studying and treating headache and migraine. The Society’s objectives are to promote the exchange of information and ideas concerning the causes and treatments of headache and related painful disorders, and to share and advance the work of its members. Learn more about the American Headache Society’s work and find out how you can become a member today.