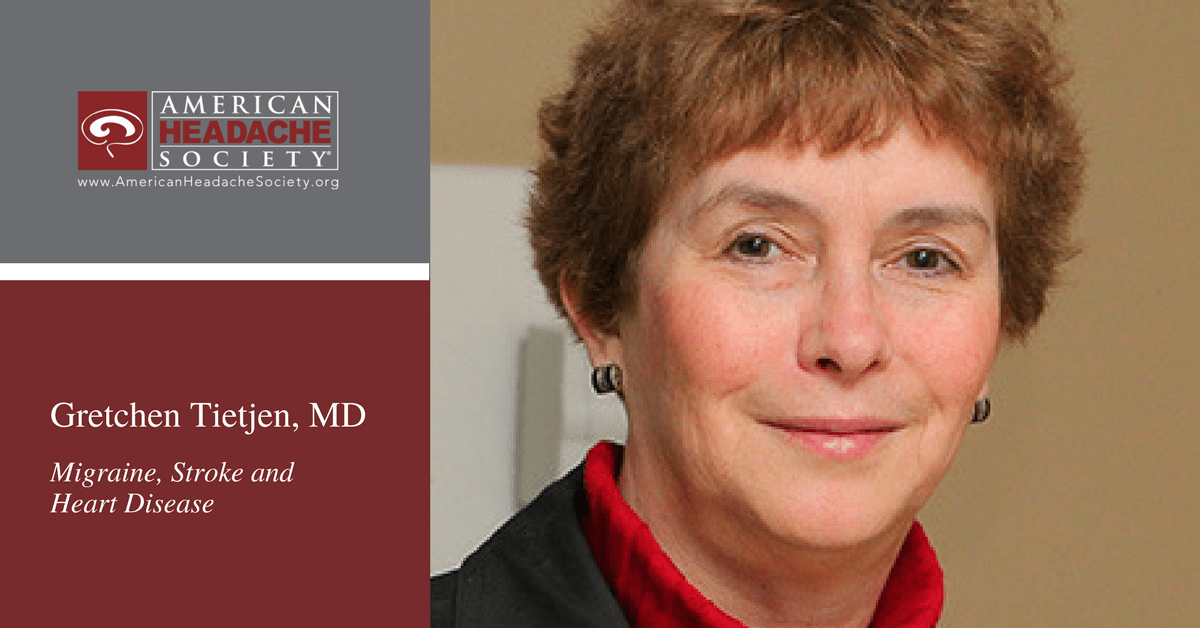 People with migraine face a statistically higher risk of stroke and heart disease. Dr. Tietjen’s research tries to understand how these diverse illnesses interrelate, and what their relationship can tell us about the mechanisms behind each

Dr. Gretchen Tietjen is a professor and chair of the University of Toledo’s Department of Neurology. She is a neurologist specializing in headache medicine and vascular neurology, or the treatment of strokes. She is particularly interested in migraine as risk factor for stroke and cerebrovascular disease in young people. We spoke with Dr. Tietjen to learn about migraine and how it can be a risk factor for stroke and heart disease.

Can you give us an overview of the correlation between migraine and stroke and heart disease?

Migraine is a risk factor for both stroke and for heart disease, primarily either myocardial infarction, which would be commonly known as a heart attack, or potentially for a type of angina caused by vasospasm. It is predominantly migraine with aura that seems to be associated with them, rather than the more common type of migraine without aura.

When we look at who’s at risk of migraine-related stroke, it is people that don’t necessarily have the conventional risk factors, who tend to be young — under the age of 45 and even under 35 — and women.

How do you advise migraine patients, especially young women with aura, to be on the lookout for signs of these elevated risks?

I would tell someone who has migraine with aura to get regular evaluations, even though they might be young and healthy, just to make sure that they’re not developing some of the more conventional risk factors. A person with migraine with aura should be evaluated and treated for overlapping risk factors like hypertension and hyperlipidemia that oftentimes run in families. Keeping a healthy weight and not smoking are important health behaviors for lowering the risk of stroke and heart disease and may also decrease frequency of migraine.

Woman experiencing migraine with aura should avoid use of  oral contraceptives that contain ethinylestradiols, as these increase the coagulability of the blood and predipose to clot formation in the arteries and the veins.

If a person notices a change in their aura, such as increased frequency or atypical characteristics—such as difficulty speaking or weakness on one side—this may be a sign of increased stroke risk.

When a patient with migraine experiences a stroke, do you think that the migraine causes the stroke, or that the aura is a sign a patient is already predisposed to stroke?

I think both are true. Migrainous infarction is a term used for the relatively rare event of stroke occurring during a migraine aura, and the cause-and-effect connection between the two events seems pretty solid. What is the mechanism? Stroke may be due to a combination of blood “stickiness,” from aura-induced activation of the platelets, and vasoconstriction (defined as narrowing of the artery). Alternatively, a person with underlying hypercoagulability from any cause may experience an aura as a result of a small clot to the brain cortex causing a phenomenon called spreading depression. This would be an aura that indicates a predisposition to stroke.

On the other hand, these are people that otherwise, if they didn’t have migraine, are not at risk of a stroke. You don’t expect healthy young women to be getting strokes. So I don’t think the migraine-stroke link should be discounted just because the numbers aren’t high.

What are some of the warning signs that people should be on the lookout for?

If aura is prolonged, particularly lasting more than an hour, that’s also an unusual feature that is a little more stroke-like, and a person should seek medical advice.

If you could give one piece of advice to those in the groups with an elevated risk factor, what advice would you give to them?

I think the main thing would be to live as healthful a lifestyle as possible, meaning eating well, sleeping well, managing stress, keeping track of your blood pressure, your cholesterol, your blood glucose. In addition, a person should be aware of their own migraine headache and aura features so that they can be aware if there’s something different occurring.

I think the other thing would be to avoid things that clearly increase stroke risk. This includes cigarette smoking, and taking estrogen-containing hormonal medications, as these both increase the risk beyond what it would be at baseline.

What should doctors and specialists in the medical community know about the relationship between migraine, stroke and heart disease that may not be common knowledge?

I think that many medical professionals may not be aware that migraine with aura is a well established stroke risk factor, so they don’t ask about it when taking a history, unless the patient is presenting for migraine as a chief complaint. Patients with migraine with aura need to be educated on other stroke risk factors and on the stroke warning signs, as well as on lifestyle changes which may help control frequency and intensity of migraine. Although there are no large clinical trials investigating the use of antiplatelet medication, such as aspirin, on migraine aura, per se, I have in my research found that blood markers of increased clotting are associated with frequency of aura. In my own practice I have often seen aura become much less frequent with aspirin use. This also may happen with discontinuation of estrogen-containing oral contraceptives.

Dr. Tietjen is a member of the American Headache Society, a professional society for doctors and other health care workers who specialize in studying and treating headache and migraine. The Society’s objectives are to promote the exchange of information and ideas concerning the causes and treatments of headache and related painful disorders, and to share and advance the work of its members. Learn more about the American Headache Society’s work and find out how you can become a member today.