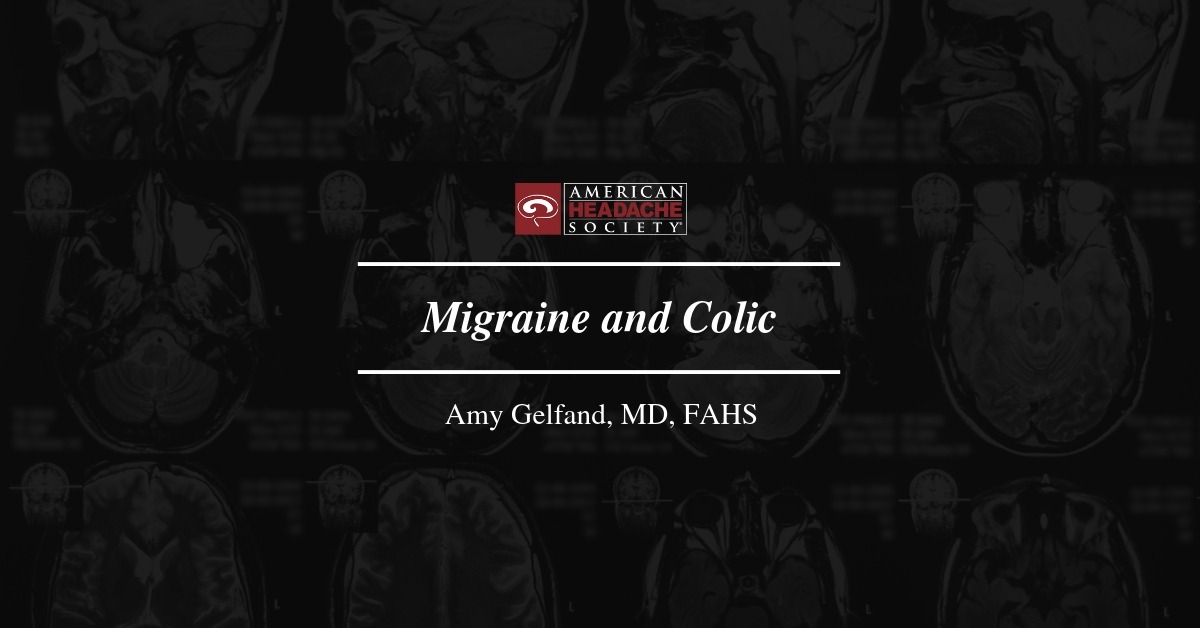 Infant colic is defined as excessive crying in an otherwise healthy and well-fed baby – usually more than three hours a day, at least three days a week, for at least three weeks. Colic is most commonly believed to be caused by a gastrointestinal problem of some kind, but Amy Gelfand, MD, FAHS, Director of the Pediatric Headache Program and University of California, San Francisco, says that it may be linked to migraine.

“I began researching the topic at the start of my career in headache medicine,” said Dr. Gelfand. “I was struck by the number of patients that mentioned how sensitive to various stimuli they were. I’m a child neurologist, so it caused me to wonder if that was what was troubling so many of these colicky babies that I had seen while I was a pediatrics resident.”

Dr. Gelfand began to research the topic extensively and found that previous literature had suggested that children with migraine were more likely to have had colic as babies. To take this research a step further, Dr. Gelfand became involved with a study surveying new mothers with migraine during their baby’s two-month wellness checkup.

“Sometimes, parents experience some difficulty answering questions about what their child was as a baby due to bias,” said Dr. Gelfand. “That’s why we wanted to get the information while their babies were still in infancy. We found that mothers who had migraine were about two and a half times as likely to have a baby who has colic.”

Children born to parents with migraine have a 50-75% higher chance of eventually being diagnosed with migraine, a statistic that further strengthens the proposed association between migraine and colic. There are still no confirmed treatments for colic and many trials of gastrointestinal-oriented therapies have been inconclusive, so this association certainly requires further exploration.

Ruling Out Other Possibilities

Dr. Gelfand recognizes that there are other medical reasons that may cause an infant to be fussy in a way that resembles colic and has developed a system for ruling out these other options. Once they are excluded, she then asks about a potential family history of migraine.

“Excessive crying can be caused by a number of things,” said Dr. Gelfand. “There are these things called hair tourniquets where a baby can get hair tied around a toe or a finger and it really hurts. The possibility of lactose intolerance also needs to be considered. Pediatricians can weigh in on that because it’s usually evident in eating and diaper patterns.”

If there is a family history of migraine present, Dr. Gelfand will then suggest non-pharmacological lifestyle adjustments similar to those suggested to adults. “Try to limit stimuli exposure,” said Dr. Gelfand. “Turn down lights, limit the number of people that are in the room at the same time. The goal is to try to keep things as quiet as they can. You might even suggest using some sort of white noise machine to limit the possibility of the baby hearing sudden loud noises.”

According to Dr. Gelfand, the topic requires more open-minded research because of the impact colic can have on families. Colic’s presumed link to gastrointestinal issues often causes mothers to believe that they have the ability to fix it, and their inability to do so can cause further stress both the mom and baby.

“Mothers specifically often feel a pressure to change their diet or test different formulas, and if that is the issue, then maybe those are worthwhile investments,” said Dr. Gelfand. “But if the baby is, in fact, migrainous and their crying is being caused by stimuli, then we have got to take that burden off of parents so they know that it’s not something they are doing wrong.”

Acetaminophen has been used for pain in the pediatric population for quite some time now, and we have gained a strong understanding of how it is broken down in the infant body. Dr. Gelfand hopes that eventually, we will be able to perform further tests on its efficacy as a potential treatment for colic, so we can learn more about its connection to migraine.

Amy Gelfand, MD, FAHS, is a member of the American Headache Society, a professional society for doctors and other health care workers who specialize in studying and treating headache and migraine. The Society’s objectives are to promote the exchange of information and ideas concerning the causes and treatments of headache and related painful disorders, and to share and advance the work of its members. Learn more about the American Headache Society’s work and find out how you can become a member today.