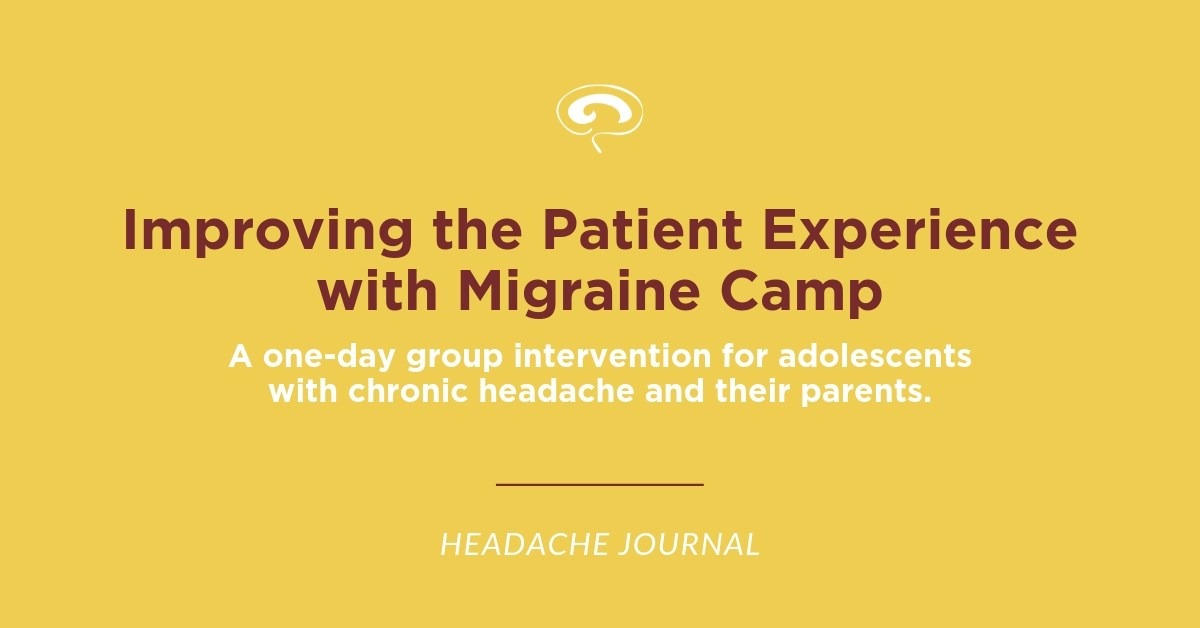 Teenage patients and their parents can benefit from one-day intervention in the form of a pediatric migraine camp, according to a paper published in Headache®.

Christina L. Szperka, MD, MSCE, FAHS of the Children’s Hospital of Philadelphia and colleagues developed the Migraine Youth Camp. The camp a comprehensive, one-day intervention aimed at providing expanded headache education. It also teaches coping strategies for living with chronic pain and encouraging the development of a supportive community for adolescents living with chronic headache disorders, as well as their families. The paper’s authors noted that feedback was positive overall. They said both patients and parents consistently described finding a benefit in connecting with others facing similar challenges.

“The goal of the camps, in general, is to try to expand clinical education beyond what we can generally do in-clinic,” Szperka says. “But also, it was really to address the fact that so many of our patients report that they feel isolated and lonely in their suffering. We wanted to bring kids who have chronic migraine together so that they can recognize that they’re not alone.”

The initial Migraine Youth Camp was developed in 2014 at the University of California at San Francisco Child & Adolescent Headache Program in collaboration with the nonprofit organization Miles for Migraine. Based on their clinical experience, pediatric headache providers designed the initial program to include sessions on various topics. These topics included migraine pathophysiology, cognitive behavioral therapy, yoga, biofeedback, art and group sessions. Separate group sessions were held for adolescents and their parents, where they could discuss shared concerns and problem-solving strategies.

“It’s meant to be a dual intervention for patients and parents,” Szperka says. “It’s very much a multidisciplinary approach.”

The camp was refined based on participant feedback, and a second site was added at CHOP in 2016. Since the first camp was held in 2014, 14 events have taken place between the UCSF and CHOP sites. Szperka notes that there are plans to expand the program to additional locations around the country, including Colorado and Delaware.

Szperka says that from the perspective of clinicians, the paper’s authors found it was possible to run these camps. She highlights, however, that the camps can be quite time-consuming, especially when putting the whole process together.

“One of our take-home points was that it is very feasible to run it a couple of times a year with our usual staff,” Szperka says. “But if someone were to try to replicate this on a weekly basis, that would require additional resources,” she says.

The paper published in Headache® is not necessarily a study on the camp itself. Szperka says they did not use patient-reported outcome measures before or after the camp took place. However, they have considered doing so as a future study to quantify the camp’s efficacy.

The real purpose behind publishing the paper, according to Szperka, was to explain how the camp was put together. Their hope is that similar efforts are launched by those interested in contributing to multidisciplinary pediatric migraine treatment.

“The goal of doing this was to disseminate the information so it can be replicated easily,” she says. “We tried to develop this paper as a how-to guide for other pediatric headache specialists who might want to replicate it.”