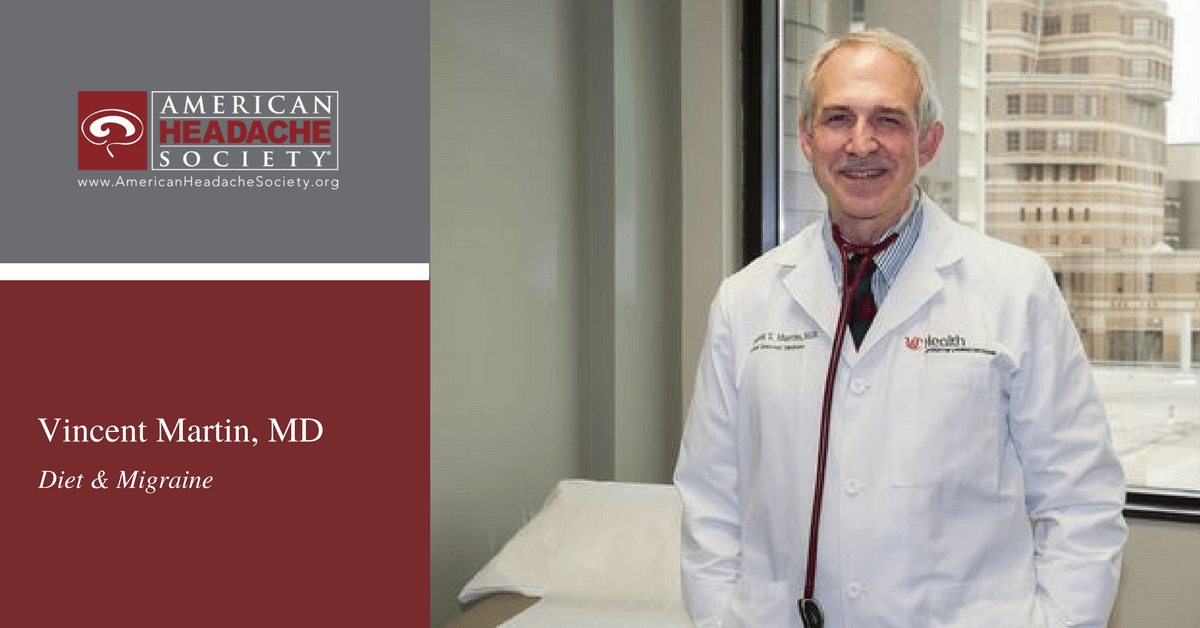 How can a patient figure out if a food is a trigger for their migraine? Dr. Vincent Martin explains the links between diet and headache

Dr. Vincent Martin is the co-director of the Headache and Facial Pain Program at the University of Cincinnati College of Medicine, where he does extensive work investigating the phenomenon of migraine triggers. He also serves as president of the National Headache Foundation, which works to increase awareness and understanding of migraine and headache.

What are common dietary triggers you’ve encountered?
Caffeine can be a big trigger. If you do consume caffeine, you want to consume it on a regular basis at about the same time, because after about 24 yours you can start to go into caffeine withdrawal, and that can trigger headaches as well as other symptoms like anxiety.  The dosage of the caffeine might also be very important. For example, when you start getting up to doses of 400 to 500 calories per day of caffeine, then they can actually cause anxiety, and depressive symptoms, and in some cases headaches.

Alcohol is a very common trigger; in particular, beer and certain types of wine. Patients often endorse the fact that red wine tends to be more of a trigger than white wine, but, frankly, I’ve seen both trigger migraines. Another is monosodium glutamate. That’s a natural flavor found in most processed foods, and there’s a lot of different names for it.

Other ingredients and/or foods would be things like nitrites, which are preservatives found in bacon, lunch meat, sausage, etc. that can trigger a headache. Other foods or ingredients that can trigger would be sweeteners. The other one is sucralose. Although there’s not a lot of great evidence for sucralose, there are some case studies that suggest that could be a trigger in individual patients, as well.

How do you advise patients to identify those triggers?
You could keep a food diary, and if you notice about more than half the time that a food is associated with a headache, then that food could be a potential trigger. If that’s the case, what you may want to do is eliminate it for two or three months and see if that helps your headaches.

Another way of identifying foods is to look an immune response to the foods themselves. There’s something called IgG food testing, where you get a blood test. That’s an antibody in the bloodstream. It usually tries to fight off invading bacteria, but, rarely, it can actually attack food. They’ll test about 100 different foods, and then they can pick out which ones you might have a susceptibility to.

What are the biggest mistakes that migraine patients make when it comes to their diets?
When you actually look at the percentage of people who are sensitive to dietary triggers, many times it’s only 10% or less. In fact, sometimes 8% or less. So a lot of people may attribute their headaches to food, when, it reality, when you try to statistically prove it, it doesn’t really factor in.

There is something called the migraine prodrome: a phase that, for some people, precedes a headache and can cause them to crave certain foods like chocolate or sweets. They may have those foods because of the migraine itself, and then they have the migraine. Sometimes they may falsely attribute the dietary trigger to causing the headache, when in fact it was just part of the migraine giving them the munchies, basically, before the migraine began.

Dr. Martin is a member of the American Headache Society, a professional society for doctors and other health care workers who specialize in studying and treating headache and migraine. The Society’s objectives are to promote the exchange of information and ideas concerning the causes and treatments of headache and related painful disorders, and to share and advance the work of its members. Learn more about the American Headache Society’s work and find out how you can become a member today.