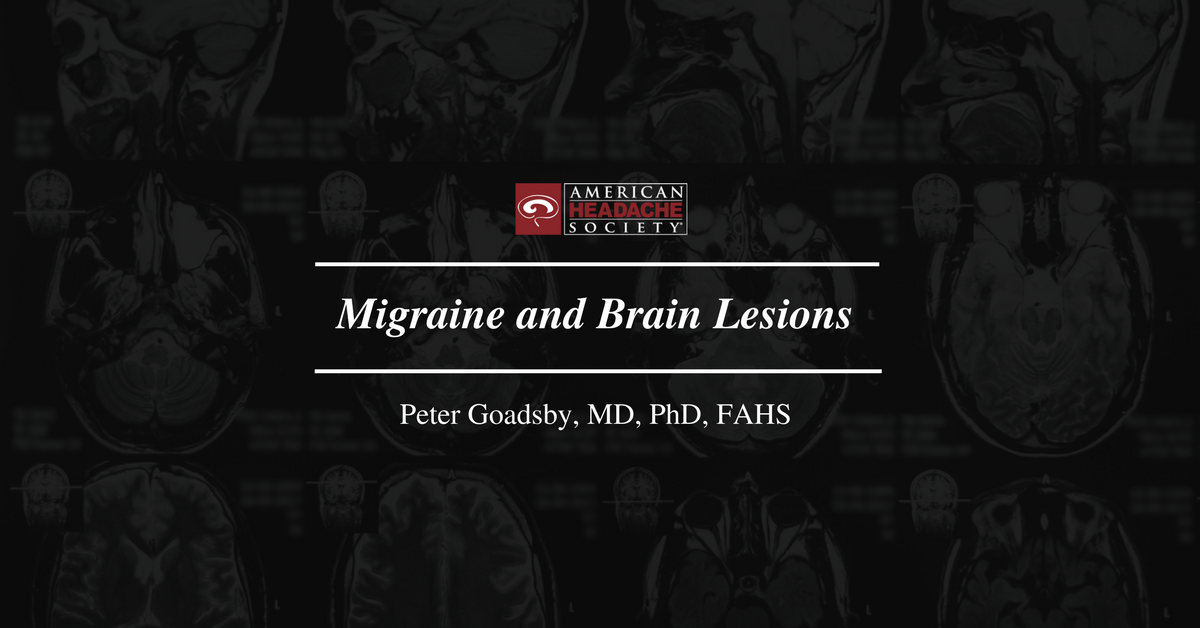 Patients with migraine are often concerned that the disorder will lead to permanent damage. This fear is exacerbated when a brain scan shows lesions. Dr. Peter Goadsby explains why this fear is unfounded.

Dr. Peter Goadsby is a neurologist, a professor of neurology and director of the NIHR Wellcome Trust at King’s Clinical Research Facility in London, a professor of neurology at the University of California, San Francisco, and will be the president-elect of the American Headache Society. He spoke with AHS to clear up common misconceptions about migraine and long-term brain damage.

Many patients with migraine fear permanent brain damage due to the severity of their head pain. What does your research tell us about the development of brain lesion in migraine patients?

Many of the patients I see with migraine are concerned that the migraine attacks or the disease is causing permanent damage. To the best of our understanding, that’s completely wrong. Migraine patients do not have to be worried about long-term brain damage. It simply doesn’t happen.

How do you know it’s wrong, and what can be done to set the record straight?

There are two very good studies which address this problem. One is called the CAMERA Study.

The CAMERA Study was a population-based study in The Netherlands where controls, patients with migraine and patients with migraine with auras were scanned. Nine years later, they were re-scanned. In those nine years, there were no changes exceeding the controls, in terms of the brain findings. These changes—little white spots—are what are being called “lesions,” but I think that’s a silly term, because actually there’s no evidence they do anything. The only group of patients where there was a small change were those with migraine without aura, which aren’t at risk of any sort of brain problem at all. Over that period of time, there’s no association with cognitive or thinking problems associated with these changes.

The other big study is called the EVA Study. It’s a French population-based study where patients born between 1922 and 1932 were scanned. Their history was taken. They weren’t examined. They were diagnosed with migraine with and without aura, and of course there were the controls. They had a battery of 10 cognitive tests, including tests of brain function. There was no correlation with the brain changes and any cognitive dysfunction.

Sadly, we all get a little bit less cognitively aware, you might say, with time. But there’s no difference between migraine patients and controls. When you look at the population-based evidence, the really good studies, there is no good evidence that those changes in the brain are even lesions, because they don’t cause anything and there is no evidence at all that migraine does excess damage to the brain.

What are the common misconceptions in the medical community about the correlation between migraine and brain lesions, and what are you doing to help set the record straight?

Many patients I see are concerned when they have a brain scan or MRI. They’re told they have changes in their brain, they’re told they have lesions.  Well the commonest misconception in the medical community is that these changes are mini strokes. There’s no evidence that they’re those at all. They don’t correlate with any cognitive dysfunction in later life. They don’t correlate with stroke risk, and in fact, with time, instead of things getting worse—which is in terms of stroke risk what happens with the population—the stroke risk for migraine sufferers normalizes after the age of 45.

So, do patients with migraine need to get regular brain scans?

If someone has a diagnosis of migraine and has a normal physical examination, getting a brain scan is worse than useless because the chance that you’ll have a problem in your brain is about one in 1,000.

What do you wish people would understand about migraine?

Migraine is an inherited episodic brain disease. It’s a serious problem that doesn’t shorten life, but ruins it. It affects our most productive people in their great middle years. What’s wonderful about migraine is we’re starting to understand the nature of the problem and the nature of the changes that happen in the brain. We’re starting to develop treatments, both for the attacks and to prevent migraine. There has never been a better time to understand the disorder, nor more opportunities to have it treated. If you want to know more, go to the American Migraine Foundation website, where all of us want to contribute information so we can actually beat this problem.

Dr. Goadsby is a member of the American Headache Society, a professional society for doctors and other health care workers who specialize in studying and treating headache and migraine. The Society’s objectives are to promote the exchange of information and ideas concerning the causes and treatments of headache and related painful disorders, and to share and advance the work of its members. Learn more about the American Headache Society’s work and find out how you can become a member today.